Touring a volcano is something different that can make you feel part of Lanzarote's unique environment. The Timanfaya National Park in Lanzarote is a restricted area, however, right at its limit, you find the Caldera Blanca trail, a unique place where you can enjoy the most impressive crater you will have ever seen. 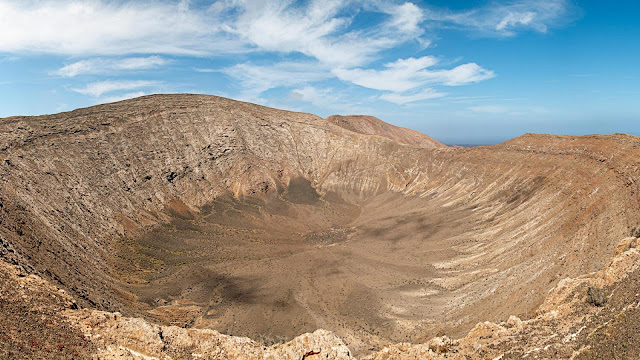 Timanfaya is an area which’s access is not easy. The visit to the Montañas del Fuego (Mountains of Fire) is limited to a 50-minute joyride. That is why to hike in Lanzarote for free, it is necessary to leave those areas declared as a National Park to find equally magical and impressive places such as the volcano of La Caldereta and Caldera Blanca. The Caldera Blanca trail takes you to the top of a monogenic volcano (the product of a single volcanic eruption) whose crater measures a whopping 1,200 meters in diameter. Once you reach the top, you are simply speechless. It is impressive and that is how you can verify it with each one you may have met during the journey. 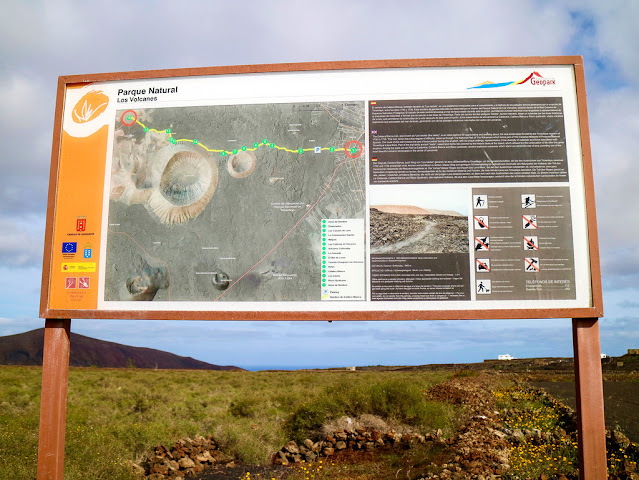 The one known as the Caldera Blanca trail starts from the small town of Mancha Blanca. To get there, if you come from the north or center of the island, you must locate the town of Tinajo on the map and from there take the detour to Mancha Blanca. Leaving the Mancha Blanca town in the direction of the Timanfaya National Park you will see the detour to the Caldera Blanca volcano.
If, on the other hand, you come from Playa Blanca (south of the island), the easiest thing is to cross the road that leads you to the entrance of the Timanfaya National Park and continue in the direction of the town of Mancha Blanca. Before reaching the town, you will see on the left the beginning of a narrow road that leads to the beginning of the path.

It is difficult to get lost because the beginning of the trail is about 2 km from the Mancha Blanca Visitor Center (which is the Timanfaya National Park Visitor Center). The path is marked with a sign and an information panel that provides some details about the route. Leaving the main road (the one that joins Timanfaya and Mancha Blanca) and taking a narrow dirt track, you reach an area enabled as a parking lot where you can leave the vehicle (if it is full you must park in the town of Mancha Blanca and walk that section).

The best panoramic view of the crater itself and its surroundings is obtained by walking for about 40 minutes along the edge of the volcano until reaching the highest point of it, which will take you just over 3 hours to complete the route. 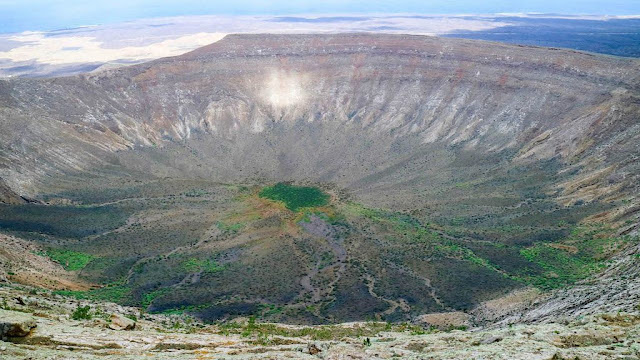 The track is very sharp and winds through seas of lava. As soon as you start walking, you found may see someone with a mountain bike returning to the parking lot. Lanzarote really is an island luxury for active tourism.

Both the Caldereta volcano and the Caldera Blanca volcano were formed about 2 million years ago but their surroundings are made up of materials from the Timanfaya eruption, the longest of all that has occurred in the Canary Islands (1730 - 1736). Both volcanoes constitute what is known as islets (small islands), which is a way of naming lands not affected by the lava flows. Its formation is the result of fissure volcanism, organized volcanism where the volcanoes are "ordered" and associated with the appearance of a deep fracture in the Earth's crust. It should be noted that in Lanzarote's toponym the word “caldera” replaces the word mountain (or volcano) when the crater is very pronounced or as striking as the mountain itself. Two examples of this are the Caldereta and Caldera Blanca.

As you advance along the Caldera Blanca trail, you are surrounded by numerous channels (rivers of molten stone) that captivate your attention as you pass through the area. It is difficult to find life forms in rocks of this youth, the lack of water does not help the survival of plants either.

However, lichens are responsible for starting the plant colonization process because they are the only plants capable of surviving under conditions as adverse as those found in this area and on this island (heat, wind, lack of water, ...). You find important populations of lichens on both sides of the path, forming a tapestry of very varied colors and indicating the quality of the environment. The north orientation of the Caldera Blanca trail allows the trade winds to play a fundamental role in the survival of these lichens that sometimes cover streams like thick carpets so much that it is impossible to recognize the color of the stone.

La Caldereta is the first volcano that you stumbled upon after about 25 minutes of walking. It has a height of 324 meters and its crater just over 300 meters in diameter. In this case, the crater is not completely round but rather elliptical, it is not perfect, but its shape is reminiscent of a large container or cauldron.

Craters produced by explosive volcanic eruptions give rise to this unique shape. You briefly leave the path that takes you to Caldera Blanca to get closer and look inside because one of its sides is completely eroded. 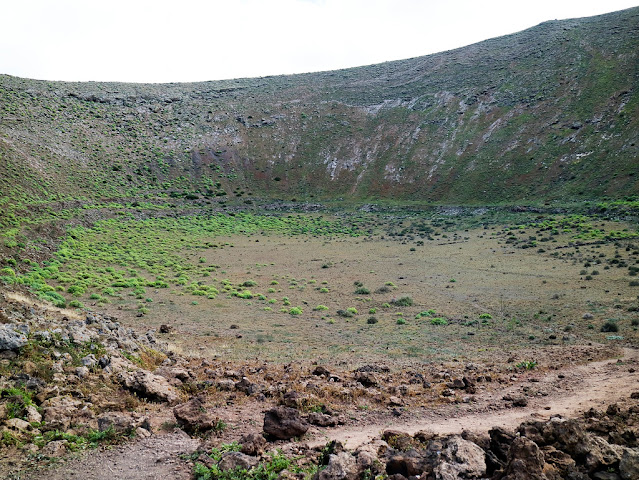 Something curious about this volcano is that activities such as agriculture and livestock developed within it during the first half of the 20th century. In places with arid climates such as Lanzarote, the interior of a volcano is a suitable place for certain activities as the crater works as a container where you can collect the scarce rains while also enjoying protection against the wind.

In the interior of La Caldereta, cereal was formerly grown and on one of the slopes of the volcano, a cistern was built to store drinking water from the rain, as a house and some pens to organize livestock. There is a path that allows you to ascend this volcano, however, you can return to the one that leads you to Caldera Blanca.

The size and height of the volcanoes of La Caldereta and Montaña Blanca caused the lavas from the Timanfaya eruption to be diverted and created around the same immense seas of lavas whose black color attracts a lot of attention.

Here, materials from different times are mixed between both volcanoes, La Caldereta and Caldera Blanca, you find solidified black lavas from more modern volcanic eruptions. The whitish tones of both volcanoes stand out among the intense black of the volcanic flows of Timanfaya.

Please use this opportunity to take numerous photographs!

You must return to the beginning of the Caldera Blanca trail (that descends the volcano) to take the path back to your origin.

Without a doubt, this trail is one of the best trails in the Canary Islands.

Now go out there and explore!

I hope you enjoyed this post! If you'd like to check out some fun Lanzarote-inspired designs on my online store, here's the link:Click here :)

If you'd like to donate to keep this blog going:Click here :) 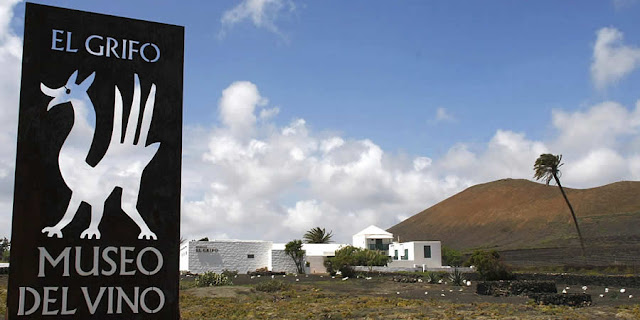 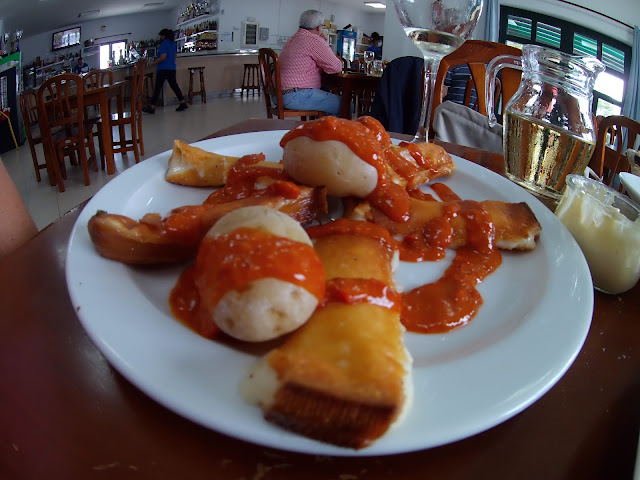